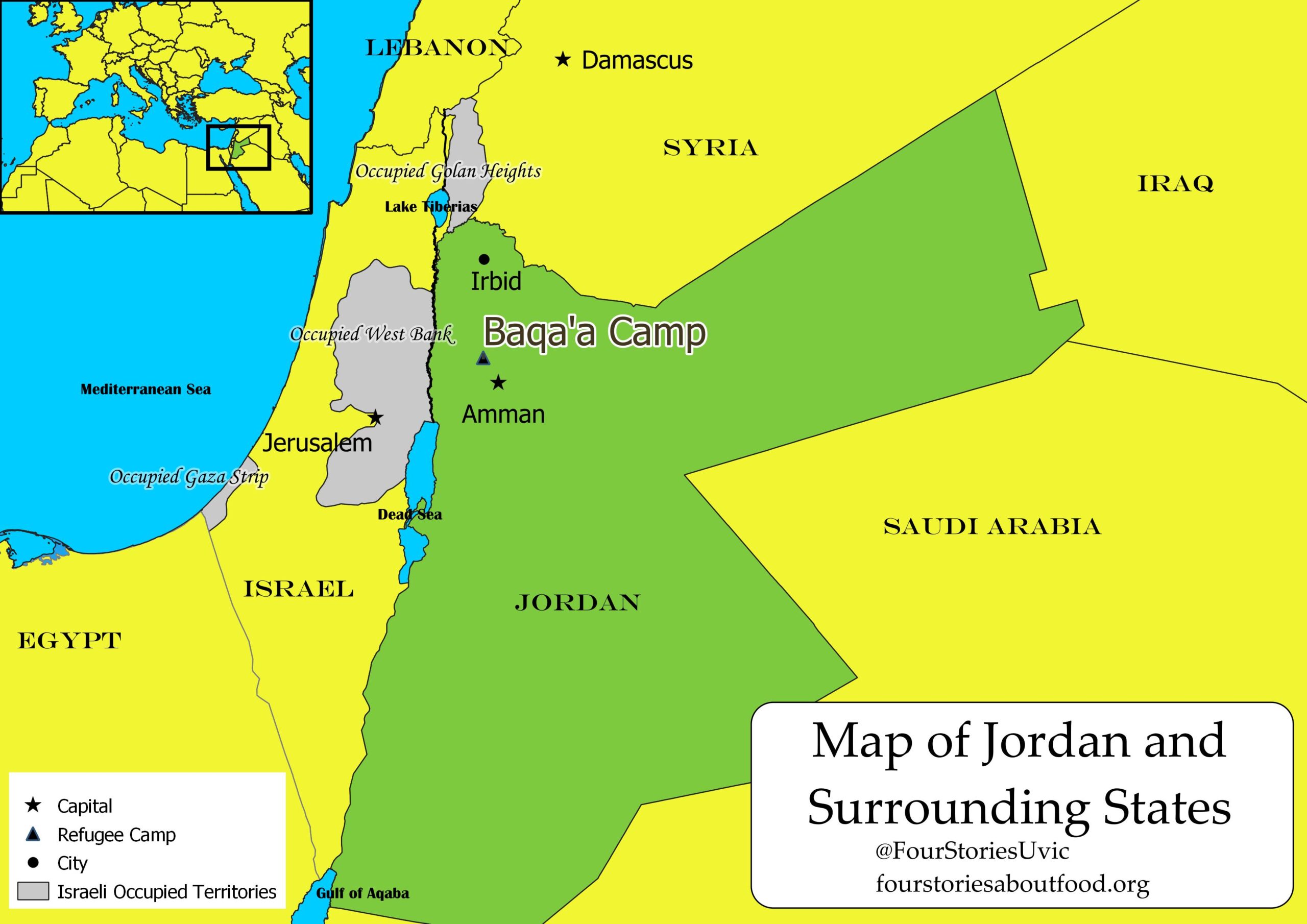 As of 2019, Jordan was considered food secure by the World Food Programme; however, the country’s high import dependence, water scarcity, extreme food insecurity at household and individual levels, increasing population, and relationship to the climate crisis all point to a growing problem of food insecurity. Jordan’s status as a semi-arid and water-scarce country means its capacity to farm is minimal. As of 2016, the agricultural area of Jordan made up roughly 12% of the country’s total land area. This natural obstacle, along with the millions of refugees currently living in Jordan, makes the question of food security all the more pressing. The Jordan Valley, the primary site of agricultural production, is dependent mostly on irrigation; however, the water sources used for irrigation are deeply impacted by overuse of aquifers, decreased rainfall resulting from climate change, and high salt content in soil that further impacts water resources as well as crop productivity. Additionally, rain-fed agriculture, necessary for the production of wheat and barley, is highly sensitive to climate change; therefore, Jordan has become increasingly dependent on imported food products, especially cereals.

Refugee communities in Jordan are amongst the most vulnerable in the country as they struggle simply to access water. They face displacement and their livelihoods are deeply dependent on external assistance, which is an immense obstacle, to gaining control over their production and consumption of food. The refugee camp Zaatari, for instance, is home to 80,000 Syrian refugees and is located in one of the driest areas of Jordan. Syrian refugees have identified common struggles to find affordable, culturally appropriate, and nutritious foods. They cite the poor quality of the relief rations provided by the World Food Programme, the need to sacrifice food vouchers to afford rent, and the limited or expensive dairy products as some examples of the obstacles regularly faced.

There is an increasing need in Jordan to push for food sovereignty, meaning the process and food security. Jordan’s urban areas, where the majority of refugee and non-refugee populations reside, are developing community-based programs and initiatives that intend to reclaim food independence in response to arable land and water scarcity.  For instance, urban agriculture and rooftop farms offer promising opportunities to return food production to communities and improve the nutrition concerns described by refugees through fruit and vegetable growth. Moreover, the Resource Centres on Urban Agriculture and Food Security are working to implement projects that promote community involvement in food production, with the projects including household level gardens and community level gardens. Such community-based initiatives are necessary to combat the worsening effects of climate change and to continue support for the refugee populations in Jordan.